In Part Three, I covered the evening sets by the Talking Heads and Elvis Costello and the Attractions.  This fourth and final installment examines my being left stranded in the middle of nowhere with only a few dollars in my pocket and the variety of adventures that ensued during my odyssey back home.

I arrived back at the faraway parking lot probably somewhere short of midnight, with the post-show, second evening party in full swing.  I was dreading having to meet back up with Doofus and That Guy.  Trying to imagine the level of obliteration they would be in by this point was a depressing scenario to ponder but, oh well, this was my ticket there and back.  Or was it? END_OF_DOCUMENT_TOKEN_TO_BE_REPLACED

008c. Once In A Lifetime: The Heatwave Festival (Pt. 3) with the Talking Heads and Elvis Costello & the Attractions, and The Kings, Mosport Park, Bowmanville, Ontario, Canada, Saturday, August  23, 1980, $20.

In Part Two, I covered the daytime sets by the Pretenders, The B-52s, Rockpile with Nick Lowe and Dave Edmunds, Teenage Head, The Rumour, and Holly and the Italians, as well as what happened once I made it through the main gate with Doofus and That Guy. Part Three focuses on the evening sets by the Talking Heads and Elvis Costello and the Attractions (and The Kings, sort of).

The fourth and final installment, concerning being left stranded in the middle of nowhere with only a few dollars in my pocket and the variety of adventures that ensued over the next day or so as I tried to make my long way back home, will be published this weekend.

Following the top flight sets from the Pretenders and The B-52s came the Talking Heads for what I hoped would be a performance on par with these two preceding acts.  I had been following the NYC foursome to varying to degrees for a few years, beginning by seeing a small piece on them in Rock Scene magazine in the mid-’70s. END_OF_DOCUMENT_TOKEN_TO_BE_REPLACED 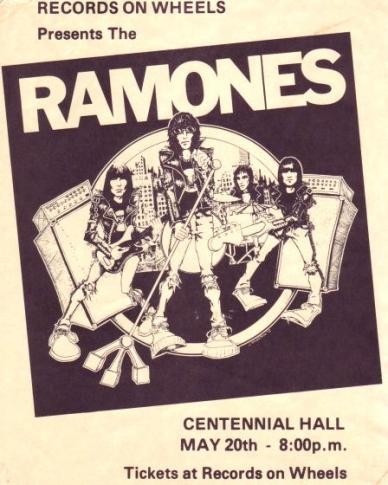 I do not have my ticket stub for this show.  In its place, here is a handbill for the concert, forwarded to me by a friend, gleaned from somewhere on the internet.  These handbills were plastered all over downtown London for weeks prior to this much-anticipated gig.

In my previous piece on The Boomtown Rats’ gig from March 1980, I discussed how time and hindsight afford one a contextual luxury that is impossible to posses during any particular era’s here and now.  This 1980 Ramones concert, with returning locals the Demics as opening act, is a perfect case in point.  At the time, I simply enjoyed this night out as one pretty thrilling concert, but in retrospect I see it as being part of each artists’ aspirational home stretch.  It felt like a new beginning in a season of anticipated triumph, but it was really one of the last moments of a closing door. END_OF_DOCUMENT_TOKEN_TO_BE_REPLACED

My first concert of the 1980s, presented by local AM station CJBK and BASS (Best Available Seating Service) who handled lots of tix back in the 70s.  Whatever happened to BASS?

006. The Fine Art of Surfacing: The Boomtown Rats with B.B. Gabor, London Gardens, London, Ontario, Canada, Wednesday March 19, 1980, $7 (and a meditation on the amorphous nature of memory).

I came up with the idea for My Life – In Concert! during the late winter of 2010 and then spent the early spring drafting my first few pieces to see if I liked the results.  Once sufficiently satisfied, I typed away so as to create a backlog of material and, in doing so, decided that I wanted to define a scope for the series (can you tell I’ve been a project manager?).  Among the decisions I made was that each show I was going to write about either had to have a strong review component, a story to tell or a situation or element that would allow me to riff on an idea or theme END_OF_DOCUMENT_TOKEN_TO_BE_REPLACED

ABOUT My Life — In Concert! … *****NOTE: Blog-wide image repairs are underway (images linked over to my opensalon.com page disappeared when the site closed). Eventually all images will be restored. Thanks for your visual patience. YOURS, THE MANAGEMENT**** Greetings! I am a terminal music fan who will be writing about my life as a concertgoer from 1975 to the present. It’s about the music but also about the lives lived along with it, with each gig recollected as a whole experience rather than simply being a description of the performance: a mix of memoir, concert review, music history, and philosophical musing. I will also sometimes publish off-theme entries, both music and non-music-related. ****** I’m on Facebook (www.facebook.com/mylifeinconcert), have a work-in-progess YouTube channel, VATV (www.youtube.com/user/mylifeinconcert). Since 2010, my primary publishing platform and audience existed over on Open Salon but that online venue sadly closed in March 2015. Welcome here to all those who were following me and commenting over there. ****** Thanks to Cublet for artwork assistance.

Search My Life — In Concert!